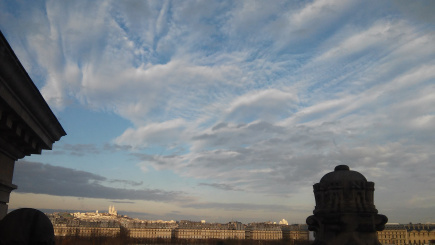 So…it’s been a while since I moved in the desert between Paris and Versailles. I’ve seen the Eiffel Tower thousand times and so the people using the metro stations like public toilets. Paris, my dear Paris, with couples in love and artists with berets. My lovely city, where the vine is pouring out of windows and the air senses like a marihuana. It’s the nostalgia even now…And I’m just in the middle of my service.

Since I’ve arrived I’ve seen a lot of weird people and experienced a lot of French habits and creepy situations. Here you have a list of things that will show you the right face of French capital and the unknown countryside.

1) “Faire la bise.” I couldn’t start with anything else….seriously. Kiss on the cheek to say hello, to say goodbye, when you’re just passing by on the toilet. Well, that’s ok cause it’s getting even worse when you want to leave Paris and stand face to face the French countryside. Then there are two tricky questions: How many kisses and from which side?

3) You turn 27 and you’re dead. At least for the French museums and monuments. You just have to see all the sight before the age 27…after that you don’t want to be the one who pay. Trust me.

4) Monday and Friday are not working days! So if you really need something, do not even try to figure it out those days.

5) You want tea? “Desolé”…we have just pretty disgusting coffee with tons of sugar cubes. (And no, we don’t know that sugar cube is Czech invention.)

6) Bureaucracy! I’ve never seen paperwork like this in my life. This is just insane and it’s impossible to even joke about it. You’re waiting for one paper nine months and when you finally get it, you don’t need it anymore.

7) That’s so sad! You don’t have any friends! This is what happens when you’re eating alone or you just wanna spend few moments alone with the Internet in the cafeteria.

8) Run, run, run! After football is running the most popular sport in France. On Sundays there are even traffics in the forests because all the shops are closed and people have nothing better to do. Me personally, I do it to…every time I’m trying to catch the last train to my home at 1 a.m.

9) Stereotype approved! Do you remember that old French film where you can see a street full of people walking home with a freshly baked baguette? That’s a reality.

10) Stereotype 0.2 approved! The same thing with bottles of wine.

11) Dinner?. Sorry, I don’t have time for this. French dinner is like a dream…if you don’t mind spending three or more hours with the same people while they’re talking about shits you don’t wanna talk about. But you know…it’s food.

13) “Liberté, égalité, fraternité!” Liberty, liberty….and at the end you don’t have any privacy. Guess the” Liberty” is different for everyone.

17) Taboos: You’re not allowed to speak publicly about politics, religion or philosophy.

18) Metro, bus, train, tram…OMG! I just adore the system of amazingly working schedules and timings of the transport in Paris. (Please, always have a phone number of you friend with a car or taxi.)

20) There’s somebody working everyday behind the borders of Paris? Seriously? And this is legal?…Mais putain! Bordel de merde!