Out of and in Focus

The concept of a youth exchange is a weird thing. In theory, these type of Erasmus programmes are meant to encourage people from different countries to share their cultures, experiences and insights with each other. Usually two or more countries are participating and the exchanges revolve around a timely topic. My inner optimistic self thinks this is great initiative but my sceptic side (which is not so prevalent nowadays, but is still there) says what’s the purpose? Isn’t the people who apply for such things are already open-minded and accepting, speak quite good English and travelled the world? What is there to discuss and debate if we are all on the same page even before we meet? But the reality looks quite different than the big concept written on a piece of paper. In the most pragmatic sense a youth exchange I participated at it is that some young people spend some significant amount of time on an ugly red carpet in a weird conference room discussing really important matters while creating a really special atmosphere where all these conversations can have a meaningful result and where you really learn something important from the people you share this experience with.

As part of my EVS duties I could participate in a youth exchange organized by my team at ICM Slaný. The title Future World: Equality for Everybody was quite a broad one but there were two major themes in the focus: gender equality and migration and besides discussions and other type of interactive activities sport was the other tool for communication. I’m proud of my co-workers and the two co-organizations Move4Lives and Sports For Life because the whole project was nicely built up. We didn’t jump in to the heavy topics right away, rather slowly creating a trusting environment, with its own rules and values and playing trust games, introductory games to get to know each other and the countries of the participants.

For seven day a small village in South Bohemia was inhabited with people from Palestine, Germany and of course from Czech Republic. At some points of the exchange a felt like an outsider but then I realized why this could happen; Well I’m the only person here who is not from the major countries and a lot of times I was hiding behind the camera while taking photos and shooting videos. When I accepted this, I was able to lean into it and ignore all this fog around my head and just be an active participant or a very curious observer.

And the new citizens of Hlavatce turned out to be quite interesting. For starters I only had a very vague idea about the situation between Palestine and Israel and the hardships of Palestinians to live the so-called normal life we have here, uninterrupted by constant turmoils and fear, feeling that their human rights are violated every day. My ignorance and blindness regarding this situation was a hard thing to swallow. Because not knowing about it is also a privilege itself and I had to face that. But the Palestinians coming to this exchange try to live their life just like the rest of young people anywhere in the world. The small things I noticed that the young Czech people and the Palestinians have exactly the same playlist with songs I’m already too old for. They watch the same Buzzfeed videos and send each other the same memes. And we are, whether we are Palestinians, Germans, Czechs, Hungarians, Muslims, Christians or Atheist are similar in our values and understanding of the world. My stereotypes were of course there, I didn’t know what to expect from a country with a Muslim culture especially regarding gender issues. There are fluctuations depending on the religious upbringing of the person but most of them are as open as we are and they still suffer from the restrictions of a previous generations. When they talked about their marriage culture and how the families put their nose into the kids’ business I couldn’t do anything but just nod my head. This is exactly what would happen in my hometown with my relatives: you have to have a big wedding with all the family members and with some additional, sexist Hungarian rituals. I can relate very well to the clash between the two generations.

From the many activities we did one will stick with me for sure. The participants were split into groups to reimagine the conversations regarding migration in Europe. In groups, people talked about the topic from various point of view, such as people who are against migrants from Czech Republic or Germany, leader of Germany and Czech Republic, an NGO for supporting refugees, the refugees themselves and they all participated in a big discussion in the end in an imaginary European conference. The exciting twist was that people were put in roles which were against their frame of reference and life experiences. For example a Palestinian guy who grew up in a refugee camp played the role of anti-refugee protestor and guy from Germany represented the point of view of the refugees coming to Europe. This change of roles resulted in the revaluation of each person’s values and beliefs and understands how others think. The girl who played a politician from Czech Republic mentioned that in order to represent the country she needed to consider the will of the majority to remain impartial and this changed how she would express herself. I felt really honoured that I could observe this event.

I really hope that the things which we created together won’t disappear after we left Hlavatce and this won’t just remain in our memory but we can share it with people around us even after we return home. I will certainly try to do that latter one. 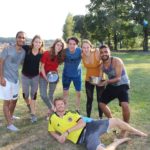 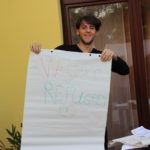