Back To Roots For Common Future (III)

22 Lis Back To Roots For Common Future (III)

The countdown had begun. We were using the last days to prepare the parade that was taking place the last Friday of the exchange. The plan was thought to make something together, to make a union between Czech and Swedish roots and create something new that we’ll keep us feeling part of a big group with no nations, embracing the differences while we enjoy them at a time.

To make things easier, people were divided into three groups. One of them was making and painting the masks that they’d worn during the show and the customes to dress up as well. Half of the masks, blue. The other half red. It was the same with the clothing thing. The costume included a basic white layer for everyone, and another more layer above. Half of them were blue and the other were red (yes, hard to guess). Every group had little parts of the other color group, too. Like the yin/yang, not everything is black or white, but we have a little bit of everything within us.  And I have to say I helped this group both with masks and costumes. And yes, of course, my clothes got stained with paint because I’m not Cristina, but Edward Scissorhands instead.

Another group was responsible for the musical part of the parade. They were the drummers. And they were cool. There is little else to say. What would happen to your favourite movie without soundtrack? I think I had my point. Sometimes in life we want that part of the films, with background music, volume getting higher in the most dramatic or euphoric moments. Well, the drummers where that amazing part who made that dream came true in real life, at least during the parade.

The last but not least group was trying to create a dance combining elements of Swedish and Czech traditional dances as well with new ingredients. In fact, they didn’t try to do that… They did it, indeed. You bet they did. Also they were the responsibles to teach the rest of the people their new bizarre, eccentric, funny and unique dance. 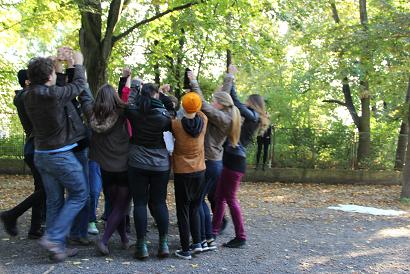 And then the parade was about to start. Everybody was dressing up, helping each other to paint their faces, putting masks on. Participants were full of excitement, I was with the camera in my hands. And the parade started. People were divided into colours, but walking together with the drums as a background sound. Flags were placed at the beginning of the crowd, announcing the arrival of the show. Participants started the way at ICM, following the steps through the main street till the main square of Slaný, clapping, walking with a meaning, just living the moment.

So they reached the main square. They were dancing in circles and putting masks off to each other, leaving behind them their blue or red fabric, wearing only the white one. No masks, no colours, no differences. Because at the end, we are all one. And they were still dancing more, with more energy, raising all the effort they made during the past days in such elvish moments. It happened so fast. It seems as if it lasted only few seconds. When it finished, all of them were hugging spontaneously, laughing, holding each other hands. Creating a new and better future. 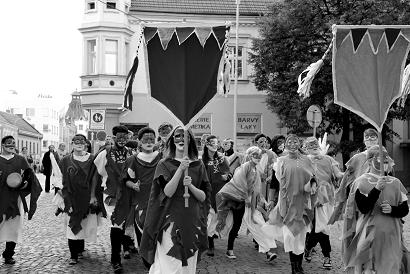 Yes, even the exchange had its end, and the next day was the exact time when everybody had to say goodbye. Also it was the time to make a review, to think about what we learned and how, what we offered to each one. Because all of us have always something to learn from others and something to teach to others. And that was one of the things we were aware of during the process, even if we were so sad after saying goodbye to realized about that. But actually it wasn’t a goodbye. It was a “see you soon, dear”. The promise of a new encounter was already done. 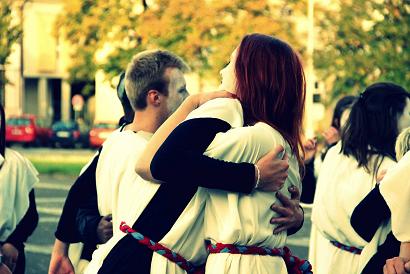